Delhi, Agra and Jaipur form three corners of the aptly named Golden Triangle, but this tour takes it up several notches. The intrigue and anticipation of a jungle safari at Ranthambore and the oasis of royalty at Samode and Neemrana comprise this sojourn’s highlights.

Delhi is the fitting start to the tour, with its harmonious blend of the classic and the contemporary. For history buffs, Delhi has marvellous monuments such as the Qutub Minar, Red Fort, Jama Masjid, India Gate and numerous museums. It’s buzzing cafes and restaurants are a foodie’s delight. And for the bargain hunter or victim of fashion, it offers unlimited shopping options.

Agra, the next stop, is synonymous with the incomparable Taj Mahal. No picture does justice to the marble marvel and its breathtaking architecture and intricate lattice work. Other Unesco world heritage sites include Fatehpur Sikri and the Agra Fort.

Experience splendour and suspense in equal measure at Ranthambore National Park. While everyone is unabashedly after the sighting of the elusive and majestic Royal Bengal Tiger, don’t let that dull the delight of spotting other wildlife such as Indian gaur, sloth bear, deer, peafowl and much more. The ruins of the Ranthambore fort inside the reserve are the ideal setting for any photographer.

Rajasthan’s capital city Jaipur, famous for its sandstone buildings, is full of stunning monuments such as the City Palace, the honeycomb Hawa Mahal and, of course, Amber Fort. Jaipur is also known for its traditional handicrafts and unique souvenirs such as camel-leather slippers.

Samode is a sleepy little village an hour’s drive from Jaipur. Its local artisans produce printed cloth and glass bangles. But the piece de resistance is the 475-year-old Samode Palace that has been lovingly maintained to offer its guests old-world opulence combined with the finest hospitality.

Neemrana Fort-Palace is another heritage property nestled among two mountains. Hanging gardens, swimming pools and a soothing spa make sure that the experience is as luxurious outside as it is within the rooms.

DAY 01 – DEPART FOR DELHI
Depart you chosen airport today bound for Delhi, arriving tomorrow. Contact me for flights from your local airport and other airlines.

DAY 02 – ARRIVE DELHI – The Imperial Heritage Hotel
Arrive Delhi today. VIP meet at aircraft door, assistant through baggage control, then outside the airport to meet our local representatives, where you will be meet at the arrivals door then transferred to your hotel.

DAY 03 – DELHI (B)
Today, after breakfast, you will enjoy a full day private guided sightseeing tour of New & Old Delhi taking in all the major sights.

DAY 04 – DELHI TO AGRA (B) – Oberoi Amarvilas
Drive to Agra (3.5 hrs) on arrival private guided sightseeing of the city concluding with a sunset visit to the famous Taj Mahal.

DAY 05 – AGRA via FATEHPUR SIKRI to RANTHAMBORE NP (B) – Sher Bagh
An option to swap yesterday’s sunset visit to the Taj Mahal and instead take an early morning sunrise visit. Then after an early breakfast drive to Fatehpur Sikri for sightseeing. Drive to Bharatpur station for the train to Swai Madhopur the gateway to Ranthambore National Park. On arrival transfer to your hotel then at leisure.

DAY 06 – RANTHAMBORE NP (B)
Early morning you will take your first game drive into the park, then return to the hotel for breakfast, after that the rest of the day is at leisure until your afternoon game drive.

DAY 07 – RANTHAMBORE NP (B)
Today as yesterday you have two game drives in Ranthambore NP. Between your safaris today you can visit the Village Women’s Craft where you can see a variety of handmade carpets, woolen carpets, tribal rugs, wildlife paintings, shawls, bed covers and much much more.

DAY 08 – RANTHAMBORE NP TO JAIPUR (B) – Samode Haveli
After breakfast, you will drive to Jaipur (3.5 hrs). On arrival after check in you will depart on a private guided tour of the city.

DAY 09 – JAIPUR (B)
In the morning, you visit the Amber Fort — one of the most fascinating of Indian forts. This afternoon you will explore the other attractions of old Jaipur, visit City Palace, Janta Mantar observatory, Hawa Mahal is known as the Palace of Winds.

DAY 10 – JAIPUR TO SAMODE (B) – Samode Palace
Morning at leisure then later you will drive to the village of Samode (1 hr). On arrival, the rest of the day is at leisure after a guided tour of the Palace. Relax by the pool or walk out and explore the village. Later return to Jaipur.

DAY 11 – SAMODE TO NEEMRANA (B) – Neemrana Fort Palace
After breakfast drive to the village of Neemrana (2.5 hrs). On arrival at leisure.

DAY  12 – NEEMRANA (B)
Leisure day to relax or explore the local village. Don’t forget to take some time out to explore the seven palace wings which are built over 14 layered tiers into the hill across 6 acres of gardens.

DAY 13 – NEEMRANA TO DELHI (B) – Trident Gurgaon
Morning at leisure then around midday drive to Delhi airport (2.5 hrs) on arrival check into your airport hotel, then at leisure. 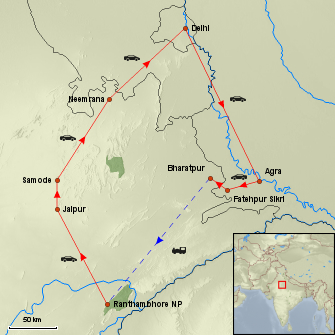 AGRA: Known for its stunning architecture, exotic history, and magical views, the Taj Mahal attracts as many as 7 million visitors each year, and for a good reason. It is, after all, the monument of love! This iconic landmark is one of the main reasons why people from all over the world visit Agra, but the city is also brimming with UNESCO World Heritage Sites, Mughal mausoleums, tombs, a beautiful fort and ancient bazaars. You’d expect to feel underwhelmed due to all that hype, but this magical city is everything you expect it to be.

FATEHPUR SIKRI: Fatehpur Sikri was the capital of the Mughal Empire for just 10 years, but it still presents a massive complex of temples, monuments, and mosques, which make it a historical delight, one of the greatest feats of Indian architecture. Built by Emperor Akbar in the 16th century, this UNESCO World Heritage Site is located at a distance of just 40 kms. from Agra. Popular attractions include the Diwan-I-Am (Hall of Public Audience), Diwan-Khana-I-Khaas (Hall of Private Audience), Turkish Sultana’s House and the Treasury. Fatehpur also hosts Jama Masjid, the largest mosque in India.

RANTHAMBORE NP: Considered to be one of the best national parks in India to see the Bengal tiger in its natural habitat, and ideally accessed either by train from Delhi or fits in nicely during a Golden Triangle tour between Agra and Jaipur. Ranthambore National Park presents a secluded oasis full of tropical dry deciduous forests and some of the most beautiful creatures you’ll ever see. Other sightings include leopard, jackal, Indian wolf, sloth bear, fox, blue bull antelope, sambar deer, chital, langur, crocodiles and an incredible variety of birds. Safaris are restricted to the mornings and evenings, so you have enough time to explore the surrounding area, visit 10th-century fortresses, discover abandoned settlements or simply enjoy the amenities offered by your luxury resort. Don’t forget to capture vivid images of your experiences, for Ranthambore is also considered to be a photographer’s dream. It presents incredible wildlife sightings, offers luxurious accommodation and also has adequate internal transportation facilities. The Tigers sighted here have found their ways to several books and movies as have the countless ruins and structures surrounding the park.

JAIPUR: The Pink City, the largest city of Rajasthan, is an epitome of magnificence and vibrancy. This city was established in 1727 by Jai Singh II and is India’s first planned city. It is known as the Pink City because of the colour of the stone used exclusively in the walled city. The Pink City stands out as one of the most spectacular and vibrant destinations on the planet, its rich lineage, striking culture and beautiful architecture painting a vivid picture of Indian society. Missing out on The City Palace, Hawa Mahal, Jantar Mantar, Jaigarh or the Amber Fort is a big no-no, but make sure you reserve time for those chaotic bazaars and delicious cuisines. Jaipur is also known for its traditional handicrafts and unique souvenirs such as camel-leather slippers. The John Madden 2012 hit The Best Exotic Marigold Hotel (You can link this to your Best Marigold tour) stole our heart presenting India in an entirely new light, one that suddenly catapulted some of its more exotic destinations like Udaipur and Jaipur to instant stardom.

SAMODE:  Discover the cobbled lanes and ancient alleyways of Samode village, with hidden frescoes and beautifully created windows, stroll past golden mustard and cauliflower fields, explore a time-trapped village. Explore the local market, stopping by the little shops where you will see the bangle maker, the cloth merchant, the gemstone expert.
A mesmerising town that is best known for its stunning Samode Palace, a fairytale that boasts mural-lined walls, mirrored hallways and countless antiques and treasures. Other places worth exploring in Samode are the 16th century Mughal garden at Samode Bagh. The historic pink city of Jaipur is just an hour’s drive away.

NEEMRANA:  Neemrana is a beautiful heritage hotel, emerging out of the blue as a towering symbol of vitality in the heart of bareness. A great fortress, bathed in the jewel-encrusted rays of the Rajasthani sun, stands tall between two emerald green mountains, echoing the richness of Rajput tradition.

It’s a shame we only had a weeks holiday available but your Golden Triangle Tour was a great introduction to India, we have fallen in love and shall return one day. All the hotels you suggested to help us keep the cost down were great, you were right as we were out sightseeing most of the day so just needed a bed for the night. Thank you for working to our budget and making such great suggestions and including so much. The mobile phone was an added bonus as we could contact our driver when we got lost shopping in the old lanes of Jaipur.