Golden Triangle India is a great introduction to North India, featuring three states, Delhi the capital city, Uttar Pradesh and Rajasthan. This tour takes you from Delhi to Agra and the famous Taj Mahal, then via Fatehpur Sikri a world heritage site to Jaipur the capital of Rajasthan called the pink city.

India’s Golden Triangle features the famous Taj Mahal giving you the quickest impressive glimpse of how India casts a spell over our hearts! The Golden Triangle so-called because Delhi, Agra, and Jaipur make a beautifully equidistant golden triangle. No wonder they call it the Golden Triangle – a truly eventful journey touching three of the most amazing cities of the mystery that is “India”!!

Jaipur has now been made famous on the world stage in the form of the film’s the Best Exotic Marigold Hotel, 1 & 2. Also, a TV program called The Real Marigold Hotel which followed celebrities seeing if they could, in fact, retire to India.

Learn to Cook Indian Cuisine
We can arrange cooking lessons or demonstrations during our Golden Triangle Tour. Please advise us at the time of inquiry if you wish to include the following in your travel itinerary.

DAY 02 – ARRIVE DELHI – Colonels Retreat
Arrive in Delhi today. VIP meet at the aircraft door, assistant through baggage control, then outside the airport to meet our local representatives, where you will be met at the arrivals door then transferred to your hotel.

DAY 03 – DELHI (B)
Today, after breakfast, you will enjoy a full-day private guided sightseeing tour of New & Old Delhi taking in all the major sights.

DAY 04 – DELHI TO AGRA (B) – Coral Tree Homestay
Drive to Agra (3.5 hrs) on arrival private guided sightseeing of the city concluding with a sunset visit to the famous Taj Mahal.

DAY 05 – AGRA TO JAIPUR (B) – Jai Mahal Palace
Options of swapping your sunset visit to the Taj Mahal for a sunrise visit this morning. Later drive to Jaipur (5.5 hrs) with en route visit Fatehpur Sikri and Abhaneri Stepwell.

DAY 06 – JAIPUR (B)
In the morning, you visit the Amber Fort — one of the most fascinating of Indian forts. This afternoon you have the option to relax at your hotel or explore the famous bazaars.

DAY 07 – JAIPUR (B)
Today you will explore the other attractions of old Jaipur, visit City Palace, Janta Mantar observatory, Hawa Mahal is known as the Palace of Winds.

DAY 08 – JAIPUR TO DELHI (B) – Pride Plaza Aerocity
Morning is at leisure then later depart by road back to Delhi (6 hrs). Alternatively, you can travel back to Delhi by train if you wish, just let us know at the time of booking.

On arrival back in Delhi, you are then at leisure to relax at your hotel.

DAY 09 – DELHI HOMEBOUND (B)
Today India bids you farewell with your transfer to the international terminal if flying home or to the domestic airport if you are extending your tour and traveling to a different destination with Mystic India. 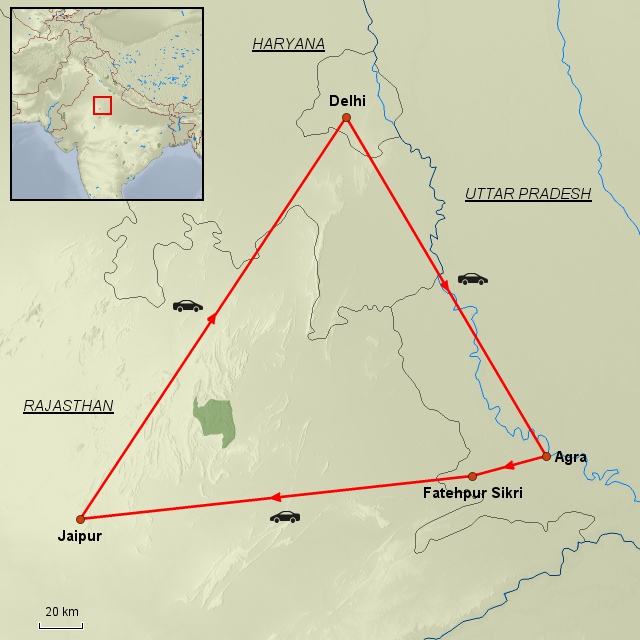 DELHI: The largest mosque, the biggest temple, honky auto-rickshaws; it’s easy to distinguish Delhi. The city has been at the centre of the Indian civilisation for centuries and a major seat of power ever since the Mughals built their capital here. Modern Delhi presents a mix of colonial-era architecture, Mughal forts, and mausoleums, ancient bazaars, glitzy malls and world-class restaurants. It often feels overwhelming, but given a chance, it always grows onto you. Be sure to visit Humayun’s Tomb, a 16th-century Mughal wonder inspired by the iconic Taj Mahal and Lodi Gardens, the best spot for sunsets in Delhi. There’s also the Hauz Khas Village, a throbbing hub that gained popularity with its Open Nights when those narrow alleys are transformed into cultural wonders, adorned with lights and decorated with streamers. There really is no better place to discover Delhi’s rich culture and mingle with its locals.

AGRA: Known for its stunning architecture, exotic history and magical views, the Taj Mahal attracts as many as 7 million visitors each year, and for a good reason. It is, after all, the monument of love! This iconic landmark is why people from all over the world visit Agra, but the city is also brimming with UNESCO World Heritage Sites, Mughal mausoleums, tombs, a beautiful fort and ancient bazaars. You’d expect to feel underwhelmed due to all that hype, but this magical city is everything you expect it to be.

FATEHPUR SIKRI: Fatehpur Sikri was the capital of the Mughal Empire for just 10 years, but it still presents a massive complex of temples, monuments, and mosques, which make it a historical delight, one of the greatest feats of Indian architecture. Built by Emperor Akbar in the 16th century, this UNESCO World Heritage Site is located at a distance of just 40 kms. from Agra. Popular attractions include the Diwan-I-Am (Hall of Public Audience), Diwan-Khana-I-Khaas (Hall of Private Audience), Turkish Sultana’s House and the Treasury. Fatehpur also hosts Jama Masjid, the largest mosque in India.

ABANERI: Abaneri, a small ancient village in Rajasthan, is mostly known for a stunning step well, a novel 10th-century idea that transformed this village into an incredibly popular tourist landmark in the modern-day. Popularly called Chand Baori, this huge stepwell has been fortified on all sides and was designed to act as a water reservoir for rainwater harvesting, used for ritual cleansing before visiting the adjoining temple and also for leisure purposes. With depths of 20 meters, 13 different levels and 3500 steps arranged in perfect symmetry, this is a fascinating work of art, the deepest and largest step well of India. The presence intricate and beautiful carvings all over the stepwell add to its stunning beauty, offering great insights into an ancient culture and their traditions. You’re probably wondering where you’ve seen that iconic image, so all you need to do is take a second look at scenes from the Best Exotic Marigold Hotel.

JAIPUR: The Pink City, the largest city of Rajasthan, is an epitome of magnificence and vibrancy. This city was established in 1727 by Jai Singh II and is India’s first planned city. It is known as the Pink City because of the colour of the stone used exclusively in the walled city.
The Pink City stands out as one of the most spectacular and vibrant destinations on the planet, its rich lineage, striking culture and beautiful architecture painting a vivid picture of Indian society. Missing out on The City Palace, Hawa Mahal, Jantar Mantar, Jaigarh or the Amber Fort is a big no-no, but make sure you reserve time for those chaotic bazaars and delicious cuisines. Jaipur is also known for its traditional handicrafts and unique souvenirs such as camel-leather slippers. The John Madden 2012 hit The Best Exotic Marigold Hotel (You can link this to your Best Marigold tour) stole our heart presenting India in an entirely new light, one that suddenly catapulted some of its more exotic destinations like Udaipur and Jaipur to instant stardom.

It’s a shame we only had a weeks holiday available but your Golden Triangle Tour was a great introduction to India, we have fallen in love and shall return one day. All the hotels you suggested to help us keep the cost down were great, you were right as we were out sightseeing most of the day so just needed a bed for the night. Thank you for working to our budget and making such great suggestions and including so much. The mobile phone was an added bonus as we could contact our driver when we got lost shopping in the old lanes of Jaipur.