This is a great tour that packs adventure and culture along with the right ingredients of fun, excitement, relaxation and logical doses of knowledge too!! Get ready with your camera and binoculars make sure you also pack the passion of a naturalist and the patience of a nature lover which put together gives you the perfect attitude for the wildlife journey ahead.

You begin tracing the tiger pug marks from Pench; a sprawling reserve surrounded by the Vindhyachal ranges. A self-sufficient system and dotted with 32 wooded hillocks and a variety of wild animals. Your next destination Kanha is all the richer in a variety of deer’s nestled in the sal and bamboo thickets.

The whole experience is very rich and remarkable especially the beautiful bird population in your next national park at Bandhavgarh. One gets to soak in the virgin beauty of crystal clear mornings and magical evenings in the folds of Mother Nature. Panna National Park, located on the river Ken is yet another tropical wildlife paradise.

After such a happening journey centered around the jungles, your visit to Khajuraho brings you into a different world altogether. A World Heritage Site, Khajuraho has 22 exquisite specimens of ancient Indian architecture in the shikhara style temples. Each temple has a story to narrate!

This tour offers a great blend; adventure and culture and of course the main attraction still stands out; spotting the magnificent and ever so elusive Tiger!!

DAY 02 – MUMBAI – Taj Mahal Palace & Tower
Arrive Mumbai, VIP meet at aircraft door, assistant through immigration control, then meet & greet at departures door then transfer to your hotel. Rest of the day is at leisure to relax after your flight.

DAY 03 – MUMBAI (B)
Today you are taken on a private guided tour of Mumbai city, depending on how much you want to see here is a list of the major sites.

We can also arrange a walking tour of the slums, Dharavi made famous in the film ‘Slumdog Millionaire’, or you may like to see how the famous dabbawalas deliver up to 200,000 lunch boxes each day. Or a trip out to see how Bollywood operates and watch some live filming

DAY 04 – MUMBAI TO PENCH NP (FB) – Jamtara Wilderness Camp
Transfer to Mumbai airport to board your flight for Nagpur. On arrival in Nagpur, you will be transferred to Pench NP (02 hrs). On arrival at leisure.

DAY 05 – PENCH NP (FB)
This morning before breakfast you will proceed for a game drive in a shared jeep.

DAY 06 – PENCH TO KANHA (FB) – Singinawa Jungle Lodge
You will drive to Kanha (4 hrs). This afternoon take your first game drives into the park by shared jeep

DAY 07 – KANHA NP (FB)
This morning before breakfast you will proceed for a game drive in a shared jeep.

DAY 08 – KANHA NP (FB)
This morning before breakfast you will proceed for a game drive in a shared jeep.

DAY 09 – KANHA TO BANDHAVGARH (FB) – Samode Safari Lodge
You will drive to Bandhavgarh (4 hrs). This afternoon you are taken on your first game drive in the park by shared jeep.

DAY 10 – BANDHAVGARH NP (FB)
This morning before breakfast you will proceed for a game drive in a shared jeep.

DAY 11 – BANDHAVGARH NP (FB)
This morning before breakfast you will proceed for a game drive in a shared jeep.

DAY 12 – BANDHAVGARH TO PANNA (FB) – The Sarai at Toria
You will drive to Panna National Park (4 hrs). This afternoon proceed for your first game drive into the park by shared jeep.

DAY 13 – PANNA NP (FB)
This morning before breakfast you will proceed for a game drive in a shared jeep.

DAY 14 – PANNA TO DELHI (B) – Vivanta by Taj Ambassador
Drive to Khajuraho (1.5 Hrs). Enjoy a half day guided tour of Khajuraho. You will visit the famous Eastern & Western group of Temples. Later you will be transferred to Khajuraho airport to board your flight for Delhi. On arrival transfer to your hotel then at leisure.

DAY 15 – DELHI HOMEBOUND OR ONWARDS (B)
Today India bids you farewell with your transfer to the International airport.

NOTE: No Jungle Safari operation on Wednesday Afternoon in all the National Parks of Madhya Pradesh. 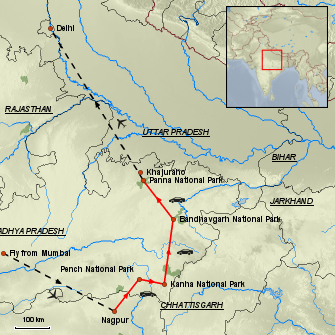 MUMBAI: Mumbai the city of dreams. One of the best and most cosmopolitan cities of Asia. The commercial lifeline of India. Home to Bollywood, the second largest film industry in the world. A place where some of the biggest slums share the area with sprawling metropolises. The epicentre for fashion and Indian wine. A trip to Mumbai is everything you’d expect from a major metropolis, yet so much more. It’s a humbling experience, to say the least. But it’s also fascinating, edgy and exciting. Those colonial-era relics, incredible bazaars, hidden wine cafes and enclaves of peace and serenity really do have a way of putting you at ease.

PENCH NP: Okay, let’s be honest. The Jungle Book led us to believe we’ll see Mowgli battling Sher Khan at the Pench National Park, but that was never really going to be. Located on the southern borders of Madhya Pradesh, Pench National Park sees fewer tourist numbers over the likes of Bandhavgarh, despite being one of the ‘Big Three’ national parks in the state. The forest is a combination of vast open grasslands, quaint watering holes, large-leaf teak and mahua, ensuring stunning sights and untouched scenes. It hosts more than 285 species of birds and exotic animals such as the jackal, tiger, wild dog, sambar, gaur, chital, and leopard. You probably won’t get to see a boy fighting jungle crime, but you’ll probably see everything else depicted in the Rudyard Kipling classic.

KANHA NP: Incredible India’s most beautiful experience is often found at the Kanha National Park, where vast sal forests, beautiful meadows and majestic tigers greet you at every step, presenting that perfect safari experience. Okay, tiger sightings may not be as common (there are 100-odd Tigers here), but you still have huge populations of antelope, deer, monkeys, wild boars, gaur and jackals to gawk at. After all, the land that inspired Jungle Book has to be special! Visit the park, enjoy a true safari, get deep into the interiors and click some of the most memorable photos of your life. Go back home and share your experiences with the world, or better yet, keep it a secret. Kanha is still not as popular as some of the other wildlife adventures in the country, and most would like this hidden oasis to stay that way.

BANDHAVGARH NP: Covering an area of 1150 sq. kms, Bandhavgarh National Park, is where you go to see the rare Royal Bengal tiger. Boasting of having the highest density of these coveted mammals, Bandhavgarh easily ranks among India’s most exciting safari destinations. Other sightings include leopards, wild boar, deer, langur, 70 species of butterflies and more than 250 species of birds. The best way to explore Bandhavgarh is via a jeep or an elephant safari so that you can get closer to these creatures and enjoy the most authentic safari experience. The place also has great mythological significance as Lord Ram gifted the ancient Bandhavgarh Fort to his brother Lakshman almost 2000 years ago.

PANNA NP: Most of the best wildlife experiences in India can be found in the heart of the country, and Panna National Park is no different. This stunning park is located at a distance of just 57 kms from the exotic temples of Khajuraho, and you really have no reason to skip out on Panna while touring Madhya Pradesh. The park is most famous for its population of big cats such as leopards and tigers, but you can also expect to see the antelope, sloth bear, crocodiles, chinkara, wolf, and chital. Its uneven rocky terrain along the Vindhya Hills feels incredibly beautiful and the stunning Ken River, cascading waterfalls, teak forests, scary ravines and Neolithic era stone paintings help keep things interesting.

KHAJURAHO: Most visitors are surprised to hear that talking about sex is such a taboo in India. The country is after all the land that gave birth to the Kama Sutra. Perhaps a trip to the temples of Khajuraho might change how you think about this seemingly conservative nation, whose complex culture presents a new wonder at each step. You’re often left wondering how temples full of erotic structures were built in the country. And it’s not just any temple! The carvings and structures found here are incredibly stunning, considered to be the finest example of temple art in the world. This UNESCO World Heritage Site is dedicated to Jain, Shiva, and Vishnu deities and is spread over an area of 20 sq. kms. With as many as 22 temples to choose from, there’s just so much to see here!

Yet another great tour arranged by Mystic India. Sharon we can tell you love India by the enthusiasm you have shown in all the tours you have arranged for us. Will speak to you next year, as we would now like to explore Sri Lanka. No doubt the most passionate travel company we have come across.