Luxurious beaches and luxuriant forests are two of Sri Lanka’s most popular travel attractions. Preserved well and not overrun by hordes of tourists, they offer relaxation, rejuvenation, and wonder. This tour captures the best of both these worlds.

We start at Negombo, a beach town that still bears some of the Colonial influence, thanks to its Dutch, Portuguese and British rulers in the 17th and 18th century. The old quarter has a laidback and quirky vibe; the locals are ever smiling, and the beach is a good way to start off.

Tangalle, the next stop, is all about beautiful nature. Kilometres of clean sands, with the occasional turtle, beckon visitors. The sea is clean, punctuated by fishing boats. Those chasing exhilaration can go whale-watching, those in search of bliss can luxuriate at spas. Beyond the sands are lush paddy fields, rock temples, and national parks.

Yala National Park is to Sri Lanka what Yellowstone is to the US, an iconic destination to marvel at flora and fauna. Keep your binoculars and cameras at the ready to spot some shy deer, ambling elephants, and fascinating insects and, of course, lurking leopards.

Mother Nature’s breathtaking beauty is again on display at Nuwara Eliya. Rolling tea estates and misty mountains add certain credence to the town’s moniker of Little England. The town center is a beehive of activity, but a little pottering about can reveal some nice colonial bungalows and hotels. A well-maintained golf course is also a great way to take in the pleasant weather and great views.

The penultimate stop on this tour, before it winds down in Negombo, is a spiritual one in the city of Kandy. It is one of the most sacred places in the Buddhist world, having a temple that houses the relic of the tooth of the Buddha.

DAY 03 – NEGOMBO to TANGALLE – Portofino Hotel
Breakfast at hotel, then leave for Tangalle (4 hrs). On arrival, the rest of the day is then at leisure to relax after your drive.

DAY 04 – TANGALLE (Mulkirigala)
After breakfast, later you will visit Mulkirigala. The Rock of Mulkirigala rises about 676 feet from the surrounding landmass. There are seven cave temples situated in five Terraced areas of different altitudes.

Return to your hotel; then the afternoon is at leisure.

DAY 05 – TANGALLE (Whale watching)
Early this morning transfer to the Mirissa Whale Watching Center by 0600 hrs to for a Whale watching expedition.

Check in to your hotel will take place after your safari.

On arrival, you will be taken on a Jeep Safari into Yala National Park. This park is famous for its high density of leopards, perhaps the highest in the world.

Later return to your hotel, then at leisure

DAY 08 – YALA (Kataragama)
After breakfast, you are taken on a sightseeing tour of Kataragama. This is a Hindu and Buddhist temple complex dedicated to Skanda-Murukan also known as Kataragamadevio. It is one of the few religious sites in Sri Lanka that is venerated by the majority Sinhala Buddhists, minority Hindu Tamils, Muslims and the indigenous Vedda people.

Later return to your hotel then at leisure

DAY 09 – YALA via (Uda Walawe & Ella) to NUWARA ELIYA – Green Hills
Depart early this morning around 0630 hrs for your will drive to Nuwara Eliya with sightseeing en-route.

First, you will visit Uda-Walawe where you are taken on a Jeep Safari into the National Park.

This national park was established in 1972 to protect the catchment area of the Uda Walawe reservoir, crucial to the livelihoods of the farmers in the southeast dry zone.

After your safari, you will depart for Ella – Ella is blessed with some of the most beautiful views, you could find in Sri Lanka.

Later continue to Nuwara Eliya; because of its invigorating mountain climate and scenery, is Sri Lanka’s most popular hill resort.

DAY 10 – NUWARA ELIYA (Horton Plains)
After breakfast at your hotel proceed for a full days tour to Horton Plains, the coldest and windiest location in Sri Lanka consists of ecosystems such as Montane evergreen forests, grasslands, marshy lands and aquatic ecosystem. At an altitude of 2,100 meters above sea level, Horton Plains spreads across over 3,169 hectares of the highest tableland of the island.

Later return to your hotel then at leisure.

DAY 11 NUWARA ELIYA TO KANDY – Earl’s Regent
After breakfast depart for Kandy with en-route visit to a tea plantation and tea factory, where it is said the best tea in the world is produced. You will be told all about the process of manufacturing tea. You can also see how tea is graded. Taste a cup of pure Ceylon tea in the factory.

Later continue to Kandy. On arrival visit the Royal Botanical Gardens in Peradeniya, the garden was first built as a pleasure garden by a Sinhala king and was expanded by the British.

You will then check in to your hotel, freshen up then late afternoon proceed on a sightseeing tour.

In the evening visit, the Temple of the Tooth Relic then later witness a cultural show featuring traditional Sri Lankan dancing

DAY 12 – KANDY via (Pinnawela) to NEGOMBO – Amagi Lagoon
After breakfast depart for Negombo. En-route visit the Elephant Orphanage in Pinnawela.

This orphanage is the home to 80 plus elephants, out of which some are baby elephants found abandoned or orphaned in the wild. They are being cared, fed and trained by the wildlife authorities.

After your elephant experience, continue to your beachside location of Negombo. On arrival, you are then at leisure

DAY 13 – NEGOMBO
After breakfast, you are taken on a boat ride along the Dutch Canals.

Later return to your hotel where the rest of the day is at leisure to relax.

DAY 15 – HOMEBOUND
Today Sri Lanka bids you farewell; you will be transferred to the international airport for your homebound flight. 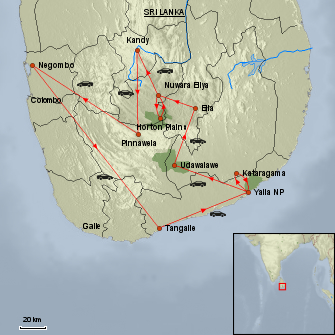 TANGALLE: Many people claim that the beaches around Tangalle have the softest sand and the safest sea along the entire south coast. Tangalle seems set to become the most exclusive of the beaches along the south coast and offers a chance to scuba dive around the coral reef protecting its four kilometres of sandy beach, and to explore a couple of wrecks. You could also watch nesting marine turtles drag themselves ashore at night to lay their eggs at Rekwalla.

YALA NP: This park is famous for its high density of leopards, perhaps the highest in the world. You are also sure to see elephants – grumpy loan males during the dry months and large herds in the wet season. Sloth bears are also a big draw. You will also see mammals such as wild boars, several species of deer and wild buffalo. There is a plethora of reptilian species and platoons of crocodiles. As is common in Sri Lanka there is a vast diversity of stunning birdlife including migratory species such as the flamingo. It is also one of the few places in the world where the severely endangered black-necked stork can still be seen.

UDA WALAWE NP: This national park was established in 1972 to protect the catchment area of the Uda Walawe reservoir, crucial to the livelihoods of the farmers in the south-east dry zone. With the land only recently reverting from cultivation, the park has some fascinating characteristics that make it well worth a visit. Not least of these is the large elephant population. Uda Walawe is the most reliable place to see elephants in their wild habitat year round. Some 400-500 elephants live in the park and herds of up to 50 are commonly seen.

ELLA: Blessed with some of the most beautiful views, you could find in Sri Lanka. Sights in Ella include the Ravana Ella Falls, Little Adam’s Peak and Bambaragala Peak among other stunning scenery. The Ravana Ella was named after the demon ruler of Sri Lanka. Ravana, who is the main antagonist in the famous epic, Ramayana. It is believed that he hid Sita whom he kidnapped in India, in the caves situated behind the falls. The Ravana Ella falls the main drop which is 30 feet in height, and it is ranked as one of the widest falls in the country.

NUWARA ELIYA: Because of its invigorating mountain climate and scenery, is Sri Lanka’s most popular hill resort. Nuwara Eliya is also the heart of Sri Lanka’s tea country producing a significant share of the world’s best tea. Sri Lanka’s highest mountain Pidurutalagala (8282 feet) is located here. Nuwara-Eliya also has one of the finest 18 hole golf courses in South Asia.

HORTON PLAINS: The coldest and windiest location in Sri Lanka consists of ecosystems such as Montane evergreen forests, grasslands, marshy lands and aquatic ecosystem. At an altitude of 2,100 meters above sea level, Horton Plains spreads across over 3,169 hectares of the highest tableland of the island. Given a large number of endemic flora and fauna species, Horton Plains was declared a UNESCO World Heritage Site on 30th July 2010. The escarpment with a depth of 900 meters called World’s End and Baker’s Falls are the highlights of the Horton Plains.

KANDY: Kandy was the last capital of the Sri Lankan kings, and is a World Heritage Site. The name Kandy conjures visions of splendour and magnificence. Many of the legends, traditions, and folklore are still lovingly kept alive. Drive around the Kandy Lake built by the last Sinhala king Sri Wickrama Rajasinghe in 1798. Visit the Kandy town and Bazaar, the arts & crafts centre and a gem museum and a lapidary.

PINNAWELA ELEPHANT ORPHANAGE: Home for 80 plus elephants, out of which some are baby elephants found abandoned or orphaned in the wild. They are being cared, fed and trained by the wildlife authorities. The best time to visit is during the feeding times when one will have the opportunity of seeing the baby elephants being bottle-fed. Also, could accompany the elephants to a river close-by and see them having their daily bath.

NEGOMBO: Negombo is a beautiful beach resort on the western coast of Sri Lanka, just a short drive north of Columbo. As it is also very close to the airport, Negombo is a convenient place to either begin or end your trip to Sri Lanka. You can relax on beautiful beaches, view incredible sunsets and enjoy western and Sri Lankan food. Seafood is very popular and is caught fresh daily by Negombo fishermen. In earlier times, Negombo was ruled by the Portuguese, Dutch, and the British. You can see evidence of the influence of these colonial rulers in many places, such as the beautiful canals built by the Dutch and the churches built by the Portuguese. Be sure to take some time and walk, or ride a bike, through Negombo and see all the interesting sites!

Thank you for all you did in making Gemma and mines honeymoon the unforgettable experience that it was. We are both so grateful for all the hard word you put in, and we have been singing your praises to everyone we meet. You helped us fall in love with India and we both can’t wait to go back!!. Please pass our thanks to your team in India who were fantastic as well. Look forward to working with you planning our next adventure.