Come and see tribal India on our Highlights of Nagaland tour. Apart from the hills and valleys, the next best thing about Nagaland is the Tribes and their intriguing history and lifestyle. There is so much more to discover about them, their diehard spirit to retain the purity and authenticity of their culture, their rituals, festivals, food habits and above all surviving in today’s metamorphosis of civilisation, in harmony with the environment.

This tour takes you to the attractive tribal places like Tuensang, Mokochang and Touphema, apart from Kohima, which is the capital of this picturesque state that still supports the Tribes. It has very fruitfully culminated into one of the most striking tourist attractions of this state. Mon, where you spend three days, is the main attraction and also happens to be the home to the Konyaks. They are known for being masters in the woodcraft and believed to create masterpieces.

The tourists find their elaborate tattoos very fascinating! The chiefs adorn themselves with ornaments made from animal horn or boar teeth. It is a real pleasure and an experience complete with wonderment, to watch them welcome people into their world, which is warm, simple and hospitable. You would surely enjoy the guided walks, expeditions, hunting trips and visits to their local homes.

Their handicrafts are worth appreciating. With so many things to experience and admire it is quite natural to lose a sense of time! Kohima, though last on the circuit in the Naga tour offers a great mix of tribal and non-tribal culture. It has the famous Second World War cemetery; a good state museum that has articulately preserved the Naga artefacts.

It is a fair mix of all the flavours; you begin at the tea city Dibrugarh, wander and admire the tribes and end the experience at Kohima before flying out from Delhi!

Arrive Dibrugarh and transfer to hotel. Rest of the day will be at leisure to pursue independent activities.

DAY 04 – DIBRUGARH TO MON (FB) – Helsa Cottage or similar
This morning start your drive to Mon (6 Hrs). In the afternoon, you will enjoy walking through Mon Market

DAY 06 – MON (FB)
You will drive to Chui village and Lonkham Village (1hr). After lunch, you will visit Mon village.

DAY 07 – MON TO MOKOKCHUNG (FB) – Metsuben Hotel or similar
After breakfast, today you will drive to Mokokchung (6 Hrs)

DAY 08 – MOKOKCHUNG (FB)
After breakfast, you will have a day to explore Ao tribal villages.

DAY 09 – MOKOKCHUNG TO TOUPHEMA (FB) – Touphema Tourist Village or similar
You will drive to Tuophema village (05 hrs). Arrive Touphema and check in at Lodge. In the evening, you will enjoy a cultural show.

DAY 10 –TOUPHEMA TO KOHIMA (FB) – Heritage Hotel or similar
You will visit one of the Renga Tribal villages, followed by a drive to Kohima–the capital of Nagaland (02 hrs).

DAY 11 –KOHIMA (FB)
You will visit the Kohima War Memorial. The evening will be at leisure to relax or walk out and explore on your own.

DAY 12 –KOHIMA TO DELHI (B) – Trident Gurgaon
Fly to Delhi. Arrive and check-in at your hotel, then at leisure. 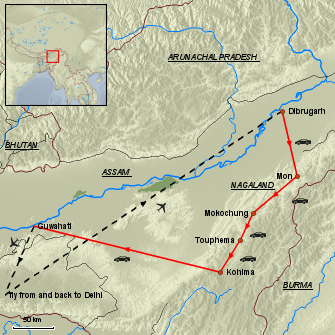 DIBRUGARH: The largest tea exporting town in India, located on the banks of the River Brahmaputra, it is the gateway to the three tea producing districts of Tinsukia, Dibrugarh, and Jorhat. A convenient base for access to Dibru Saikhowa NP, home to feral horses, Asiatic Wild Buffalo, White winged wood duck, Tiger, Elephant, Leopard, Jungle Cat, Bears, Small Indian Civet, Squirrels, Gangetic Dolphin and more. Dibrugarh is also the gateway to the adjoining tribal state of Arunachal Pradesh.

MOKOCHUNG: This hill station of Nagaland is the oldest town in the state and has a distinctly colonial feel to it. A drive to this hill station through the winding road with forest stretches is a thrilling experience. One can experience the Maotsu Festival of the Ao tribe with a sip of rice beer and singing and dancing.

TOUPHEMA: Located 41 km from Nagaland’s capital Kohima, Touphema is a small pictorial village which offers you an exceptional view of traditional Naga lifestyle in the lap of nature. The motto is to preserve the Naga traditional lifestyle, and that is why this village is recognised as tourist village by the local government. It offers essential comforts in an ethnic setting; the interiors also invite you into the chapters of history, traditions and ancient myths of the Naga culture.

KOHIMA: Kohima has its own unique flavour as a hill resort. A pretty town endearingly unspoilt, tranquil and immersed in history. Go for a tour around the Garrison Hill area, to revisit the Battle of Kohima and the 2nd World War Cemetery listing the brave Nagas who laid down their lives during the famous battle of the ‘Tennis Court’ took place. A bronze plate with a suitable epitaph supports each grave.

What our Clients Stay

Richard and I are home safe and sound after our trip to Nagaland, and I have to give you an A+++ for all your trip arrangements! Everything worked out so beautifully, even though I know some of our locations and logistics were not easy to arrange. Your contact people in India could not have been better……all of them….guides, drivers and meet and greet people. Your hotel choices, too, were wonderful, with the exception, of course, Mon……but even that was probably the best available, and it was not their fault that the town’s electricity was out, also meaning no water. Anyway, I couldn’t be more pleased with your services and with your associates in India. I’m sure Richard feels the same. I certainly will recommend Mystic India to any friends looking to make an independent trip to India. Thanks for everything, Sharon. It was just a really great trip and memory! You are an excellent travel agent. All the best,