Our Khajuraho and Varanasi begins in Delhi, India’s capital city. Visit both Old and New Delhi, an open-air museum with three of India’s 38 UNESCO World Heritage sights, the Red Fort complex, Humayun’s Tomb and Qutub Minar plus much more. Then there is Old Delhi and Jama Masjid. Take a walk in Chandi Chowkh, the old market lanes first planned by the daughter of Shah Jahan of Taj Mahal fame.

The next stop Varanasi, one of the world’s oldest continually inhabited cities. It is the holiest city in Hinduism and Jainism and famous for its ‘ghats’ or stone embankments on the river Ganges. Visit the old town, wander along the Ghats or sit awhile and people watch. Also, visit Sarnath, where Buddha gave his first public teaching after he reached enlightenment.

Continuing in the central state of Madhya Pradesh, your next destination is Orchha. Situated on the banks of the Betwa River, this town has several palaces, cenotaphs, temples and tombs to hold your interest.

The experiences continue at your next destination, Gwalior where another magnificent fort awaits you. Built on a hilltop by Man Singh Tomar, the fort has been standing rock solid since the 8th century. The Jai Vilas Palace and Man Mandir Palace are other attractions in this town.

Then there is Agra, home to the famous Taj Mahal. The marble mausoleum draws millions of visitors each year who are awed by its near super-human craftsmanship and intricate latticework. Fatehpur Sikri is another historical edifice worth visiting while you’re in Agra, located about an hours drive from the city, then back to Delhi from where you started. We hope you have now fallen in love with India and will return.

DAY 01 – FLY TO DELHI
Fly to Delhi today for the start of the Khajuraho and Varanasi Tour. Speak to Mystic India about your prefered departure airport and choice of airlines.

DAY 02 – ARRIVE DELHI – Haveli Dharampura
Arrive Delhi, VIP meet at aircraft door, assistant through immigration control, then meet & greet at departures door then transfer to your hotel.  Rest of the day is at leisure to relax after your flight.

DAY 03 – DELHI (B)
Today, after breakfast, you will enjoy a full day private guided sightseeing tour of New & Old Delhi taking in all the major sights. This afternoon explore the famous Chandni Chowkh Bazaar. For lunch today you can experience the famous street food here, in fact, Chandni Chowkh is often called the food capital of India.

DAY 04 – DELHI TO VARANASI (B) – Brijrama Palace
This morning you will be transferred to the airport for the flight to Varanasi, on arrival you are met and transferred to your hotel. Late afternoon you will board you private rowing boat for a journey along the Ganges, ending at the Aarti ceremony where you can view the activities from your boat.

DAY 05 – VARANASI (B)
Early to rise for the sunset Aarti ceremony on the banks of the Ganges. Then take a tour through the small old lanes of the city, located back from the river. Return to your hotel for a late breakfast, then later you will drive out to Sarnath where Buddha gave his first sermon after receiving enlightenment. Return to your hotel later this afternoon then at leisure

DAY 06 – VARANASI (B)
This morning take a tour around the latter addition of Varanasi city, away from the Ghats area. Then this afternoon is at leisure to relax and walks out on your own. Do spend some time just sitting o the ghats and watch the world go by.

DAY 08 – KHAJURAHO & PANNA NP (B)
This afternoon you will take a drive out to Panna National Park located about 1 hours drive away, for an afternoon safari by jeep. Return to your hotel then evening at leisure

DAY 09 – KHAJURAHO TO ORCHHA (B) – Amar Mahal
After breakfast drive to Orchha (3.5 hrs) on arrival after check in and lunch, you will be taken on a tour of the area. Orchha is a city frozen in time. It was founded by Bundela Chieftain, Raja Rudra Pratap in the 16th century, who chose this stretch of land along the Betwa river as an ideal site for his capital. He and the succeeding rulers of Orchha built many beautiful palaces and temples in the 16th and 17th century.

DAY 10 – ORCHHA TO GWALIOR (B) – Usha Kiran Palace
Early start today as the drive to Gwalior today (2.45 hrs) you will be calling in at Datia and Sonagiri en-route. Datia is a famed for the seven-storied palace built by Raja Beer Singh Deo in 1614. Sonagiri a Jain Pilgrim destinations which has many Jain temples from the 9th & 10th century located on little hills. Later continue to Gwalior, then at leisure.

DAY 11 -GWALIOR TO AGRA (B) – ITC Mughal
This morning proceed for sightseeing of Gwalior, then late afternoon drive to Agra (2 hrs). On arrival, you are then at leisure, but we can arrange a visit to the Taj Mahal for sunset this evening or tomorrow evening.

DAY 12 – AGRA (B)
Up early for sunrise visit to Taj Mahal, then return to your hotel for breakfast. Then proceed for a private guided tour of Agra.

DAY 13 – AGRA TO DELHI (B) – Trident Gurgaon
This morning we can arrange an optional visit to Fatehpur Sikri, Akbar’s deserted city a World Heritage site located just 1 hour away just of the Agra to Jaipur road. You will then proceed to drive back to Delhi (4 hrs) on arrival at leisure. Optionally we can arrange for your driver to be available for you in the afternoon for shopping etc 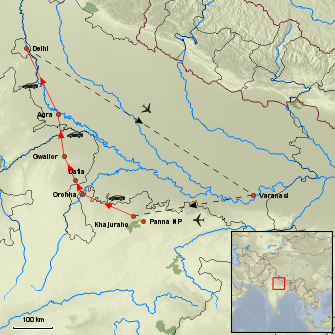 Our  Khajuraho and Varanasi Tour features the following locations

VARANASI: Varanasi, formerly known as Benaras, is considered to be one of the most sacred cities in India, for it is revered among the Hindus, Buddhists as well as the Jains. Located on the banks of the Ganges, this incredible journey brings you closer to an entirely unique side of India’s culture, a spiritual journey towards ash-covered sadhus, yogis, temples, and devotees. Many come to this ancient city to wash away sins of a lifetime; some come here for a dip in the holy river, and yet others visit the place for its fantastic food and unique culture. It’s mysterious, magical and chaotic, probably all at once. It is one of the oldest continually inhabited destinations on the planet and a historical centre of silk weaving. The markets here tend to be chaotic, yet; you’re sure to find hidden souvenirs that are so unique to this place. This is surely a journey unlike any other.

KHAJURAHO: Most visitors are surprised to hear that talking about sex is such a taboo in India. The country is after all the land that gave birth to the Kama Sutra. Perhaps a trip to the temples of Khajuraho might change how you think about this seemingly conservative nation, whose complex culture presents a new wonder at each step. You’re often left wondering how temples full of erotic structures were built in the country. And it’s not just any temple! The carvings and structures found here are incredibly stunning, considered to be the finest example of temple art in the world. This UNESCO World Heritage Site is dedicated to Jain, Shiva, and Vishnu deities and is spread over an area of 20 sq. kms. With as many as 22 temples to choose from, there’s just so much to see here!

PANNA NP: Most of the best wildlife experiences in India can be found in the heart of the country, and Panna National Park is no different. This stunning park is located at a distance of just 57 kms from the exotic temples of Khajuraho, and you really have no reason to skip out on Panna while touring Madhya Pradesh. The park is most famous for its population of big cats such as leopards and tigers, but you can also expect to see the antelope, sloth bear, crocodiles, chinkara, wolf, and chital. Its uneven rocky terrain along the Vindhya Hills feels incredibly beautiful, and the stunning Ken River, cascading waterfalls, teak forests, scary ravines and Neolithic era stone paintings help keep things interesting.

ORCHHA: Located on the banks of the Betwa River, Orchha is essentially a medieval town that is known for its fantastic architecture, 16th-century palaces, and cenotaphs. Once a bustling capital of one of the most powerful kingdoms of Central India, modern-day Orchha is as laid-back and stress-free as they come, one of the best destinations to de-stress. There are some great homestays in the countryside and activities like trekking, rafting and cycling are sure to fill up your itineraries. The key attraction of this historic town is the Orchha Fort, home to three magnificent palaces. The Jahangir Mahal is famous for its strong masonry, the Raj Mahal for its beautiful murals and the Rai Parveen Mahal for its serene gardens. Other places of interest include the Raja Ram Temple, Laxminarayan Temple, and Phool Bagh.

GWALIOR: The cultural capital of Madhya Pradesh might be most famous for that spectacular hilltop fort, once defined as ‘the pearl amongst fortresses in India’ by Mughal emperor Barbur, but it also promises an interesting experience, a weekend getaway that is full of beautiful temples, exquisite architecture, and historic palaces. The city may have lost out on some of its historic beauty and regalias, but it still hasn’t lost out on any of its appeal, something that is best seen in Jai Vilas Palace, the historic seat of one of the most revered families in the country.

AGRA: Known for its stunning architecture, exotic history and magical views, the Taj Mahal attracts as many as 7 million visitors each year, and for a good reason. It is, after all, the monument of love! This iconic landmark is why people from all over the world visit Agra, but the city is also brimming with UNESCO World Heritage Sites, Mughal mausoleums, tombs, a beautiful fort and ancient bazaars. You’d expect to feel underwhelmed due to all that hype, but this magical city is everything you expect it to be.