Ajanta and Ellora Caves are more than caves, they are portals into a time thousands of years ago. Ajanta and Ellora caves hold some of the best preserved and most influential sculptures, paintings and frescos from Buddhism, Hinduism and Jainism. Both UNESCO World Heritage Sites, they are the perfect weekend getaway from Mumbai, which is where you will begin and end this tour.

The closest major town from Ajanta and Ellora caves is Aurangabad, which served as the last capital of the Mughal emperor Aurangzeb from 1653 to 1707. Now an industrial and commercial centre, it is nonetheless famous for Bibi Ka Maqbara, a replica of the Taj Mahal, commissioned by Aurangzeb in the memory of his first wife, Dilras Banu Begum. Interestingly, the Taj Mahal was built by Aurangzeb’s father, Emperor Shah Jahan, as a memorial to his wife, Mumtaz Mahal.

One-hundred-and-four kilometres away from Aurangabad are the magnificent Buddhist Ajanta caves. Built in two phases between 2BC to 480 to 650CE, the caves lay forgotten for a millennium until they were ‘re-discovered’ by a British officer named John Smith in 1819. Carved into a horseshoe-shaped 250-foot wall of rock, the caves consist of monasteries and prayer halls, and are filled with precise and evocative sculptures as well as expressive wall paintings about the various forms of Buddha and erstwhile Buddhist deities.

Ellora Caves, located about 100km from Ajanta caves, stand as a shining example of India’s religious diversity and co-existence. The 34 caves that are open to the public have artwork from Buddhism, Hinduism and Jainism, all commissioned by Hindu rulers. Cave 16, in particular, is the Kailasa temple, dedicated to Lord Shiva. It is a temple complex carved out of a single rock and doubles the size of the Parthenon in Athens. Cave 2 is equally impressive, housing a magnificent statue of Buddha on a lion.

Another set of caves featuring intricate carvings is at Pithalkora, about 78km from Aurangabad.

The last monument on tour, Daulatabad fortress, is located halfway between Ajanta and Ellora. The influence of Islamic architecture is evident in the structure’s Persian style victory tower Chand Minar, the 14th century Jama Masjid with 106 pillars, the blue tiled Chini Mahal and the Baradari Palace.

DAY 01 – MUMBAI TO AURANGABAD – Vivanta by Taj
This is a side tour for our clients already in India and wishing to add on a trip to visit Ajanta and Ellora Caves. International flights are not included. Meet in Mumbai and transfer to the airport for the domestic flight to Aurangabad. On arrival meet and transfer to your hotel. After a freshen up this afternoon you will proceed on a sightseeing tour of the city, visit Bibi ka Maqbara, the mausoleum of Aurangzeb’s wife Rabia Daurani which was built in 1679 and modelled on the Taj Mahal. Nearby stands the Pan Chakki (water mill), a 17th-century mill that was used to grind grain for pilgrims. It also has a marble shrine to Aurangzeb’s spiritual advisor. Also, visit a Himroo Factory where beautiful cotton and silk fabrics are produced.

DAY 02 – AURANGABAD – AJANTA (B)
After breakfast you will proceed for a full days tour to Ajanta (closed on Monday). The Buddhist caves of Ajanta lying 166 km northeast of Aurangabad date from 200 BC to 650 AD. The 30 rock-hewn caves are adorned with sculptures and frescoes, portraying in epic form the religious and secular life through eight centuries. Many of the caves house panels depicting stories from the Jatakas, depicting Buddha’s previous births. It is a World Heritage site.

DAY 03 – AURANGABAD – ELLORA & PITHALKORA (B)
After Breakfast you will proceed for sightseeing of Ellora Caves (closed on Tuesday). The Caves of Ellora, another World Heritage site, are carved into the side of a basaltic hill 30 km from Aurangabad. The finest specimens of cave-temple architecture, they encompass 34 rock-cut shrines representing Buddhist, Jain and Hindu art dating from the 4th to 5th century AD. The 12 caves to the south are Buddhist, the 17 in the centre Hindu, and the 5 caves to the north are Jain. The most remarkable is the Kailash Temple, meant to be a replica of Shiva’s celestial abode Mt. Kailash. It is the best example of rock cut architecture and an engineering marvel. Later proceed for a visit to Pithalkora Caves, located 78 kms from Aurangabad. The intricate work on the sculptured facades in these caves is definitely worth a visit.

DAY 04 – AURANGABAD TO DAULATABAD THEN MUMBAI (B)
After breakfast, you will proceed for a visit to Daulatabad fortress located halfway between Aurangabad and Ellora, the magnificent hilltop fortress of Daulatabad (Deogiri) is surrounded by 5 km of sturdy walls. See the 60 m high Persian style victory tower Chand Minar, the 14th century Jama Masjid with 106 pillars, the blue tiled Chini Mahal and the Baradari Palace. Later transfer to the airport for your late afternoon flight back to Mumbai.

On arrival back in Mumbai, you are under your own arrangements.

We can arrange sightseeing of the city if adding on an extra day or so, here is a list of the major things to see

We can also arrange a walking tour of the slums, Dharavi made famous in the film ‘Slumdog Millionaire’ or you may like to see how the famous dabbawalas deliver up to 200,000 lunch boxes each day. 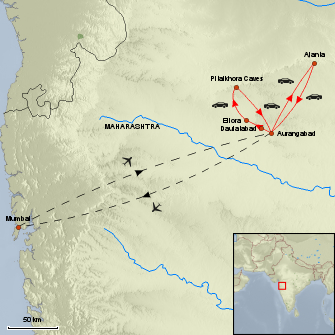 AURANGABAD: Named after Mughal Emperor Aurangzeb, Aurangabad finds a place on the traveller’s map largely due to the presence of two iconic UNESCO World Heritage Sites. Popularly called the City of Gates, this ancient wonder was once dotted by 52 medieval era gates (only four main gates remain today). The first and foremost thing that you need to do in Aurangabad is to organise a trip to the Ajanta and Ellora Caves. If you’re still looking for a fix of some antiquity and grandeur, the Aurangabad Caves, Panchakki and Daulatabad Caves are sure to keep you company. Bibi ka Maqbara, bearing resemblance to the iconic Taj Mahal, is another important monument in the city. Art aficionados would want to visit the University Museum, Sunheri Mahal Museum and the Chhatrapati Shivaji Museum. Silk fabrics were once a huge industry here, and the city’s hand-woven Paithani saris are still famous all over the world.

AJANTA CAVES: Did you know that Ajanta Caves were abandoned for over a millennium, only to be re-discovered in the year 1819? Makes you wonder how something so unique could ever be forgotten! Carved into a horseshoe-shaped rock in the state of Maharashtra, Ajanta is one considered to host some of the finest examples of Indian art and architecture. Numbered from 1 to 29, these caves contain ancient masterpieces, colourful murals, depictions of the Jataka tales, statues of Buddha and Bodhisattvas and wall paintings portraying scenes from everyday life. There’s an excellent viewing platform across the river as well!

ELLORA CAVES: Ellora portrays ancient Indian civilisation in a new light and shows you just how advanced and culturally beautiful they really were. This UNESCO World Heritage Site hosts 34 caves that present monasteries, temples and courtyards built by Hindu, Buddhist and Jain monks. Many of these caves were created from top to bottom and required immense planning and coordination over generations to take shape. Cave 16, the most beautiful Hindu cave, presents a magnificent temple carved out of solid rock. It is truly a feat of human genius, for it took 100 years to complete, demanded the removal of 250,000 tonnes of rock from an area that is double the size of Parthenon (Athens). Cave 2, the most impressive Buddhist cave, is also worth a watch. It hosts 12 pillars lined with seated Buddha sculptures and a magnificent statue of Buddha seated on a lion.

PITHALKORA CAVES: Pithalkora Caves, located 78 kms from  Aurangabad. The intricate work on the sculptured facades in these caves is definitely worth a visit.